In August, 2007, I was in Marion to picking up a boat that I was chartering for the week for my family. I had some time on my hands and I was told that Tabor Boy was still in Fairhaven for repairs. I needed to go to New Bedford anyway, and thought I would take the opportunity to…

Picking up on Jamie Hutton's earlier post, how many times can you sight Tabor Boy in this Sail Training International video?

Only kidding about the valuable prizes! Hope you enjoyed the video though.… Continue

The Quietest Ship In the World

Last Sunday, my former shipmate Jamie Hutton XO '79 (who grew up to be a NOAA engineer) gave my son Luke and I a tour of NOAA Ship Henry B. Bigelow while she was dockside at the Naval Station Newport. Here's a slideshow of a few photos that I took which you can also view in more detail with
Jamie's comments on Flickr.com. Hopefully Jamie will also add a few comments to this post…

Catching up with the XO 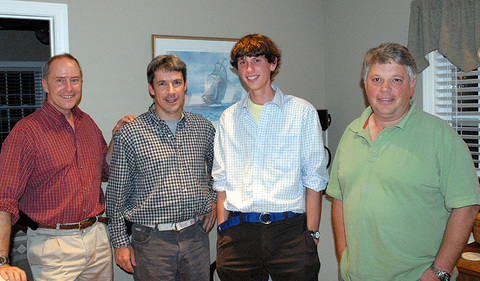 Thanks to the wonderful hospitality of Becky and Bob Glover, several former Tabor Boy shipmates had the chance to get together for a great dinner and meet the current XO, Chris Henry. The food was amazing and the discussion was very interesting although us "old timers" probably told a few too many… Continue

Just a one timer

Back in the day I was blessed to go on a spring cruise to the Bahamas on the Tabor Boy. Unlike most of you on this site I wasn't smart enough at the time to join the crew. I was a 'paying visitor". BUT after some 50 years that trip still is one of my fondest memories.

I didn't know crap about sailing but Cpt Glasier still had each of stand watch, take a shift at the helm, climb the rigging and generally try to not get in the way of you real sailors.

Back when I was a Tabor student, my mother clipped every article she could find in the newspaper about Tabor Boy and the tall ships and she created 2 incredible scrapbooks for me. I will be posting these articles periodically, so make sure you are subscribed or at least check in with the Tabor Boy…

This is an essay I wrote that appeared in the 15th edition of Sail Tall Ships! A Directory of Sail Training and Adventure at Sea published by the American Sail Training Association.

As legend has it, in April of 1973, Barclay Warburton III and a few like-minded Newport maritime leaders met in the aft cabin of his brigantine Black Pearl to sign the articles of incorporation for the American Sail Training Association. The rest is history retold elsewhere in this…

Thoughts on Sail Training, and US maritime influences on Commercial Trade

This might be an appropriate time to bang out an essay describing some of the inter-related disciplines that connect many of our students with the following organizations and professions: Tabor Academy students may not always be aware of the value of attending a United States Naval Honor School, but if they become associated with, or enamored with The American Sail Training Association, and / or The…

The Privilege of Sailing

Those of us who have sailed on the SSV Tabor Boy are, by nearly anyone's measure, "privileged." We were privileged to have been given an opportunity to participate in a unique life changing experience and we took advantage of it. Most of us were also privileged in that we grew up in middle or upper middle class families that could afford to send us…

During the summer of 1976, I sailed on Tabor Boy as paid crew and had the amazing good fortune of participating in the Bicentennial Tall Ships Race from Bermuda to Newport and the Operation Sail event in Boston. At last Friday's Headmaster's Council meeting I ran into an old friend; someone I hadn't seen in over 30 years. Chris Dowley graduated in '76 but joined us for this once in a lifetime experience of sailing with the world's largest gathering of…