In August, 2007, I was in Marion to picking up a boat that I was chartering for the week for my family. I had some time on my hands and I was told that Tabor Boy was still in Fairhaven for repairs. I needed to go to New Bedford anyway, and thought I would take the opportunity to visit the ship and witness the work being done. The weather presented a pretty drizzly day. 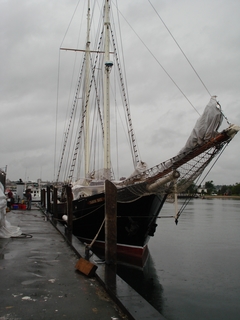 I had expected the schooner to be out of the water at the time, but she had been launched sometime before I got there. Jim Geil was aboard and said I could go anywhere I wanted to but to be careful about open hatches as there were several crews working below decks at the time. He did not have a lot of time to speak with me as he had his hands full with final touches that were being implemented in order to complete her refit. I continue to be impressed with his work on the schooner. He is not only a great captain but he handles the kids well and they seem to respect and admire him. I believe we can all be grateful for his presence.

I have never seen the schooner so torn apart before and Jim was true to his word. The mayhem was not confined to the top deck alone although there was plenty going on there despite the weather. The deckhouse look like a tool storage area and the only thing that looked like it usually does was the navigation station. When I got below decks, I was confronted with a scene that only a construction contractor could love. Deck hatches were pulled up and heavy-duty paper was taped down to the decks everywhere. Cables and wire, some part of the schooner and some not, ran everywhere and dangled from overheads like so many cobwebs. The only thing there was plenty of was dust.

The galley was being attended to by a painting crew and then added a chemical odor to the whole scene. The captain's cabin was uninhabited by crews but was pulled apart such as to be unrecognizable. I was able to poke my head down an open hatch and discovered the bilge as clean as I've ever seen it all though it had plenty of tools and wiring of its own. I made my way forward and engaged an HVAC contractor installing a good-sized boiler in a compartment just forward of the galley. He told me the unit would keep Tabor Boy warm during the cold winter months so that she could be worked on by student crew and contractors year-round. The unit looked like something that would heat a good-sized home. He confirmed that indeed it was no different than what a residential home would have.

The forecastle seemed to be relatively complete or had escaped the carnage altogether. Moving aft, I came upon the engine room where two engineers were buried in buckets, tools, and various other machinery parts. Not having an engineering background, I can say the whole scene was pretty confusing but if they could figure it out, in the end it would be a pretty impressive power plant. I visited the after cabin to discover workman building the battery containers inside the settee. It seems Tabor Boy is no different than all other ships in making good use of every available space.

Upon returning to the deck and a rainy afternoon, I am again reminded that when we take to the sea, nothing can be taken for granted and thus, nothing is simple. But I am impressed with the obsessive attention to detail and the meticulous care that is bestowed on this gem of a vessel. She is, and will continue to be our magnificent flagship and ambassador for our school for years to come.

Comment by James Hutton on December 21, 2007 at 9:11pm
Chris,
Thanks for the update and pictures.
Best wishes for the Holidays and New Year.
Jamie

Comment by Peter A. Mello on December 21, 2007 at 4:24pm
Chris;
Excellent post and thanks for all of the great photos.
Been looking forward to it and it's been worth the wait. I hope that you become a frequent contributor, especially stories and pictures from your time sailing.
Thanks again for posting!
Happy Holidays and Fair Winds!