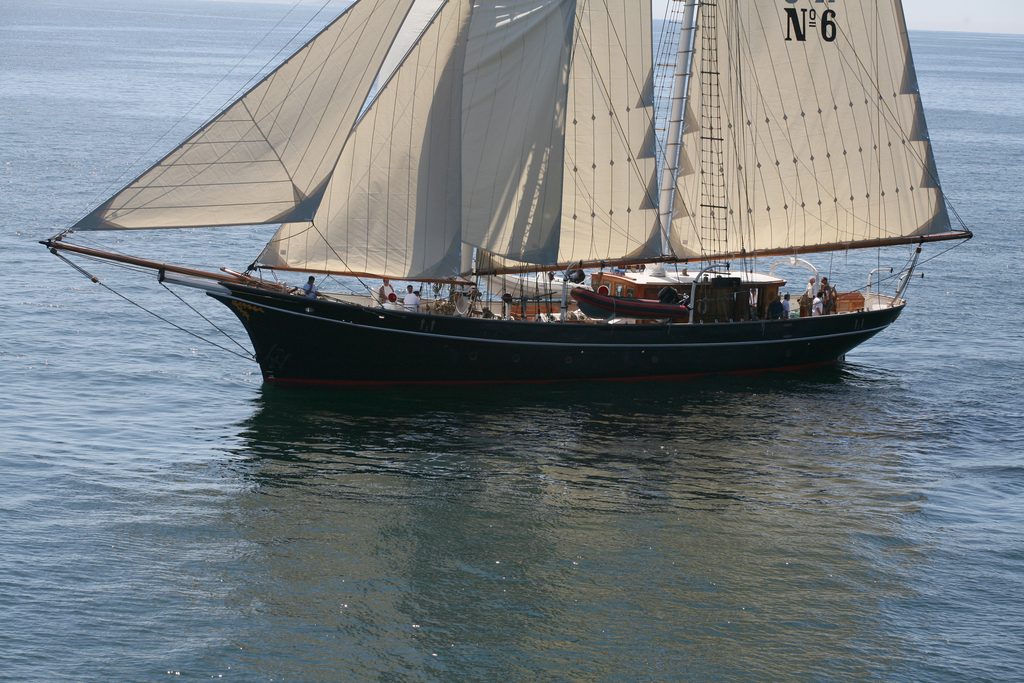 She was launched on the 23rd of September 1920 and put into service on the 1st of March 1921 as “Nederlandse Loodsschoener”, a Dutch pilot schooner for the Royal “Loodswezen Texel”. Named “No. 6” she served in the 3rd district off the Dutch North Sea coast between the

island of Texel and the port of Ijmuiden and later in the 2nd district around Terschelling and Harlingen. She is one of 37 vessels built for pilot services in all 6 districts of the Dutch coast between 1870 and 1920. These vessels made up for what today would be called a “class”. Similar developments of Pilot Schooners could be witnessed at the German and Belgium North Sea coasts.

Based on the design of “Baltimore Clippers” the first of such schooners were built in North America in the 18th century and initially had a length of 20, later 30 meters. The original designs were amended to improve the schooners sailing capabilities and were later copied in several countries and even used to build yachts in this very first period of yachting. At the end of the 19th century the first European pilot schooners were built in Belgium, Germany and Holland. They were pretty ships and clearly showed the heritage of their sisters the “Baltimore’s” with their grand bowspirits and overhanging round sterns. In total there were 37 schooners put to service in Holland under de “Nederlandse Loodswezen”, the Royal Dutch Pilot Association. The British “yatching World” features the schooner “Texel” in her issue from 23.10.1926, this was the 33rd schooner built and sold to E.G. Martin, a famous British  circumnavigator. One of the boats sold to an American is featured in the Hollywood movie from 1958 “Twilight for the Gods” as “cannibal” starring Gregory Peck as Captain.

10 of the Dutch pilot schooners were built of steel and 5 of those, including “No. 6”, weremoved between the years of 1923 and 1925 to the “rijkswerft Willemsoord” in Den Helder (todayone of the biggest Navy museums).

Here in the Royal Navy yard they were refurbished to “Motorschoeners”, meaning a sailing vessel with engines – a quite modern idea at the time. Some even with the installation of 2 engines each. “No. 6” (being the 4th refurbished) was put in service in 1925 as “M4” in the district of Vlissingen & De Schelde guiding ships into the waterways of Hoek v. Holland, Antwerp, Vlissingen. She served until 1931 in this function and was sold 29th of March 1933 to the cotton tycoon Mr. George McFadden from Philadelphia, USA, from the amount of 27,000 Dutch Guilders. He re-named the boat to “Samothrace”, a name associated with the island of the same name and the Greek mythology. Now entered into the Loyd’s registry for the first time. She was moved to the royal “Maatschappij de Schelde”, the Royal yard “society” in Vlissingen and further refurbished into a schooner yacht with even then antique wood obtained from “van Veere’s begraafplaats”. This wooden paneling is still today visible in the dining salon and 2 guest cabins.

Mr. McFadden sailed the boat to Greek and Cyprus waters where he used her for his hobby: archeology. Later, during the Second World War the yacht was chartered for a short time by the American OSS for the transport of supplies and personnel between Alexandia, Egypt, and the island of Cyprus.

After the war Mr. McFadden returned with the boat to his archaeological digs in Cyprus where today his house is a museum. He died in 1953 by drowning when sailing and capsized a small sailboat.

He sold the boat in 1947 to King Farouk I of Egypt who renamed her “Feid el Bihar” registered in Venice. The boat was after a short period in Egypt waters mainly based in Italy where the king was spending his holidays. During this time she even appeared in Italian films when lying in Portoferraio, Elba. The master cabin on board was refurbished to the king’s taste with richly carved panels, gold plated light fittings, and 4 harem bunks.

Little has changed since, only one bunk has been modified into a writing desk and seating. Also a bathroom with Mahogany bathtub has been added to the master bedroom. All the beautifully two-colored carved woodwork remains. Before he was thrown off his throne in 1952, the king transferred ownership to his Captain in 1952. She was within a couple of years sold to a gentleman from Genoa, Italy who renamed her “Maria II”.

1955 the Naval Recuperi Srl. owned by the Agusta family obtained her and installed 2 new Deutz engines and renamed her to “Rosetta I”. In 1975 she still appears with the same name in the Register of Genoa, Italy and remained with Agusta until 1983 when sold to a Norwegian.

The current owner found her named “Sonia Maria” and under Vorwegian Flag in 2001. He fell instantly in love with the vessel, although the entire vessel including all the woodwork was painted in white (to achieve minimum maintenance). After several months of negotiations with the Norwegian owner, who during his 18 years of ownership always kept her in Italian waters, she was obtained and now renamed to “No. 6”. She today flies the British Flag with homeport London and after considerable restoration work is now showing her heritage in a proud manner.