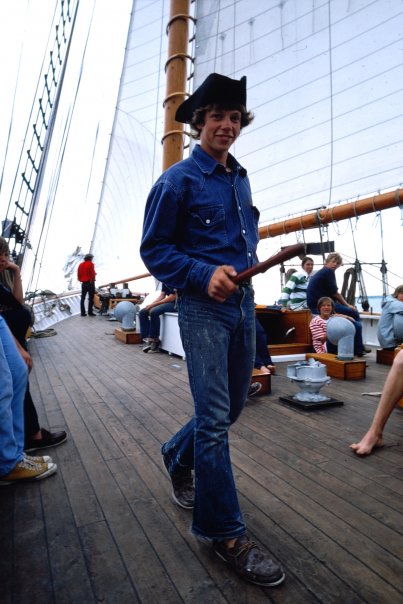 It’s often fun to come across old photos of your friends. I often get a kick at old shots of my shipmates from our youthful years aboard the TABOR BOY. I happen to run across this shot taken of now Capt Robert Glover, during his days aboard the BILL OF RIGHTS, which he sailed aboard as deck hand before coming to Tabor. As fait would have it, he sailed as captain aboard her years later.
I first met Bob during Op Sail '76 when the BILL OF RIGHTS was docked along side the TABOR BOY, probably within a month of this photo's taking. I never would have guessed at that time that this fellow misfit would become one of closest friends. The following fall, we both sailed together aboard the TABOR BOY. After graduation, we both attended Maine Maritime Academy and again sailed together aboard the STATE OF MAINE as midshipmen. I greatly value our friendship which originated aboard the TABOR BOY. I will always be in dept to the TABOR BOY program for this friendship and many others.

Comment by Rob "Swabby" Atkinson on January 1, 2010 at 11:58am
Ha! Great picture Jamie. That is amazing that you had that picture from before the Tabor Boy!
Happy New Years to all!

Comment by James Hutton on November 9, 2009 at 8:21am
Look at those huge feet! You know what they say about big feet? Big feet - big Topsiders!

Comment by R.C.Glover III on October 30, 2009 at 2:20pm
However......I am humbled by Jamie's comments and often speak warmly of our friendship,,lead down a course by our destiny on Tabor Boy!