Tabor Boy: 100 Years at Sea is an extraordinary short film, not so much for the beautiful footage of the schooner but because it tells a compelling story about what's so special about Tabor Academy. Of course, we all know that but the film takes it to a whole different level.

It's great to reflect back on our times there and to watch the current students in action but for me the most powerful part of the film is all the footage and stories that preceded me. In particular I was struck by the vision of W. Houston Lillard, Tabor Academy’s fifth headmaster, who wrote in his 1916 book Bigger Men for a Smaller World:

“We have been especially blessed with a seashore location which makes possible some salt water geography and other constructive and broadening influences which are certainly effective in giving the boys a fair chance to meet the new world conditions with a generous spirit. We are trying to prevent intolerance, narrowness and isolated selfishness, by giving a better understanding of the other fellow’s genuine assets. In no sense is this school to be tagged as one which trains especially for the seafaring profession, but rather we do wish to make clear that boat handling, cruising and travel are very valuable assets in educating our present day boy for useful citizenship.”

I hope you enjoy the film and I invite you to provide your thoughts in the comments below or better yet, do a blog post of your own about your experience watching the film. I created this website to capture and share stories about an extraordinary ship that has shaped thousands of young lives at Tabor over the past 60 years. Please join in and tell your sea stories!

Thanks for being a crewmember on The Tabor Boy Project! 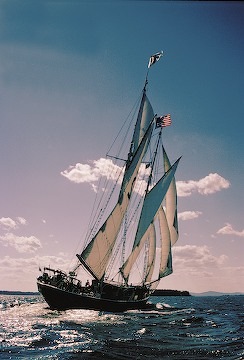 I enjoyed the film. It's amazing what the sailing program has done for so many young people.

Peter, I forgot to mention NESN did a documentary around 1986 and they probably have lots of good footage. I remember them filming the Tabor Boy from bunker hill in buzzards bay.

On another note, I think Captain Geil spoke more words in that movie than the entire three years I knew him at Tabor.   Congratulations to him for successfully expanding such a great program at Tabor.

I loved the film and it brought back so many memories! Also, I am both proud and elated that the Tabor Boy program continues to thrive and involve so many young lives. The program was quintessential to shaping my life and I would not have my current carrier as a marine engineer working aboard research ships if it wasn’t for the program and Cap Glaeaser.

I was also intrigued to learn so much of Tabor’s history which I was previously unaware of such as Houston Lillard’s formulating the academy into the “School by the Sea”. It was also fun to see footage of the preceding training sail ships.

Bravo Zulu and huge thanks to John Rice for putting this amazing document together. John did an outstanding job! All-A-Taut-O !!!